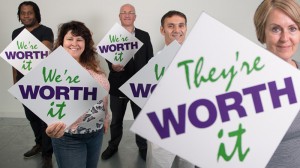 The independent Pay Review Body for the NHS recommended a 1% increase to all pay points for all staff, no matter where they work. But health secretary Jeremy Hunt MP ignored them in March and announced an unconsolidated payment for only a minority of staff in England.  With the cost of living soaring, 1% is not enough, but it is what most staff expected from the Chancellor. Mr Hunt’s announcement is a massive cuts package, presented as pay restraint. By denying 1% to 60% of staff not at the top of their grade the government is saving £296m. But the Treasury had already clawed back £2.1bn cash from cuts in the 2012/13 financial year. And the pay award drives a further wedge between NHS staff doing the same job in different areas of the UK.

A day of protest to raise awareness about the anger UNSION members working in the NHS are feeling around the recent NHS pay announcements and show how holding down NHS pay will have an impact on patients and staff morale.

Join us with our Pennine Acute Colleagues in telling this Government that we are WORTH IT!!

This entry was posted in Welcome. Bookmark the permalink. Comments are closed, but you can leave a trackback: Trackback URL.